The Variable Speed Pulley Drives have been in production for over 50 Years. They hold a leading position in the field of steplessly variable speed drives.

Variable Speed Pulley Drives converts any standard constant speed motor to a Variable speed, that delivers infinite speed control for any desired speed within the speed range, instantly, accurately, smoothly and while the machine is in operation.

There are basically two types of systems

This drive consists of :

The spring loaded pulley is mounted on the driving shaft (Motor) The motor is fixed on slide base.

Fixed diameter pulley (Fix Pulley) is mounted on machine / Gear reducer shaft and belt is inserted on both the pulleys.

The motor slide base is moved either towards or away from the fixed pulley while running. Through this change in center distance between driving and driven shaft, the belt is pulled in or out of the spring loaded pulley. This therefore changes the effective running diameter of the belt on the Variable Speed Pulley and in turn, speed variation of the driveN (Fixed pulley) is achieved. Apart from motor slide bases, motor pivoting arm or Jockey pulley can be used. 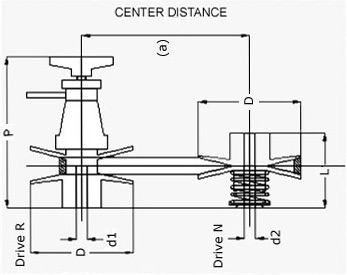 Both the pulleys work together. The belt is pulled in or out between both pulleys, thus changing the effective running diameter of the pulleys and speed variation is achieved. The variation is obtained by means of the screw spindle provided on the mechanically adjusted pulley.